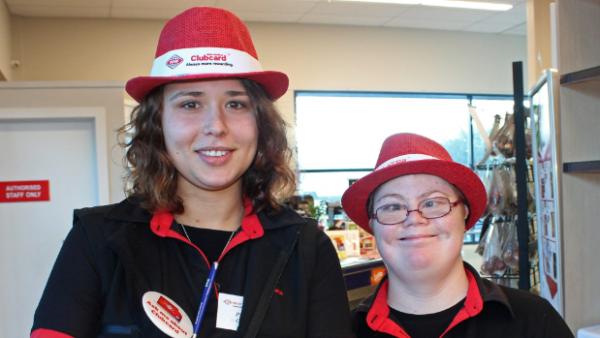 For most people, that wouldn't be big news, but for Courtney it is a step in the right direction for ending stigma against disabled people.

Courtney has Down Syndrome, which is caused by an extra copy of chromosome 21 inside each of the body's cells.

Her mother Sue Duncan had spent weeks walking the streets of Cambridge trying to find Courtney a job, when finally she was successful at New World.

"She did get some work experience out of some businesses, which was really good, but they were too small to take her on full time," she said.

"But now she works at the checkout packing bags and she absolutely loves it.

"She is always dressed and ready for work an hour before she is due to leave."

The programme allows businesses (they must apply) to hire a special needs worker as an extra staff member.

Their first year is 100 per cent funded, and their second year is 80 per cent covered.

"The two years is good because it gives these guys time to practise the skills they need, and then they could potentially become full time, fully employed staff members," said Sue.

"They just want to do the same things as everyone else.

"She [Courtney] is happy, she's getting out there in the community and interacting with people, and she is focused on what she is doing," Sue said.

"They would be very focused and very efficient staff members if they are given enough time to learn the skills."

Sue said many young people were in the same boat as Courtney, trying to find work having come through high school, and it was important to keep them within the community.

So far the feedback she had received about Courtney working at New World was brilliant.

"The customers love her, and if they have a problem with her they can just use a different aisle," she said.

- Story and photo by Emma James

Story republished with permission from  http://www.stuff.co.nz/national/health/93235310/waikato-mum-advocates-for-businesses-to-hire-special-needs-people